Report about the great Kamailio Developer Meeting 2018 in Düsseldorf.

About the Kamailio Developer Meeting

End of September (27th to 28th) 2018 a bunch of Kamailio developers came together in Düsseldorf (Germany) to spend two days hacking on the Kamailio code. We were happy that sipgate offered to sponsor the event venue in their offices in Düsseldorf. We've got a nice tour through their offices and were also able to enjoy there good food during lunch time.

At Thursday sipgate invited us in the evening to their own company pub "Hafenquelle", were we shared some great pizza and had a few cold drinks. Several colleagues from sipgate and other Kamailio community members joined us during the evening as well. It was a great evening to socialize, discuss and share interesting stories.

Many thanks to sipgate for sponsoring the event!

This Kamailio developers participated in the development meeting.

The following picture shows all participants during the social event on Thursday evening. 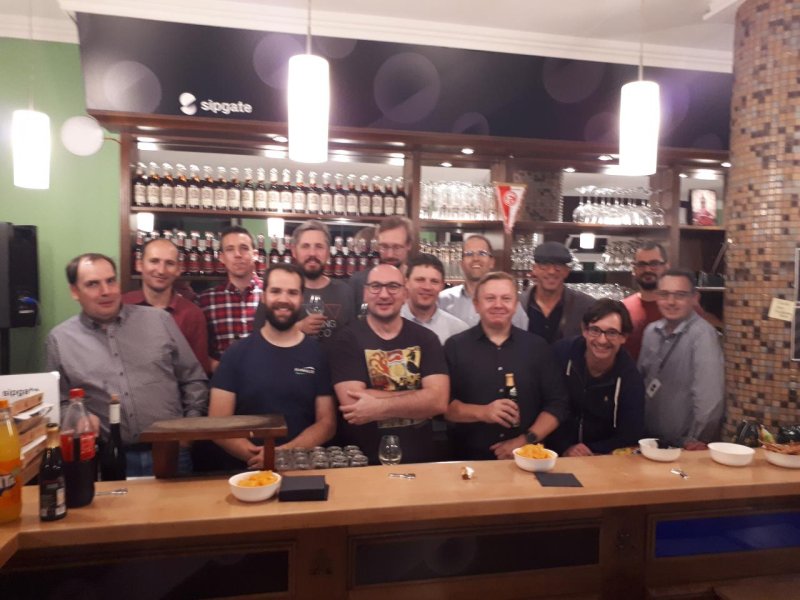 Results of the meeting

During the meeting a total of 256 commits were created and pushed to the repository. This was a great team work from all participants! We worked in several areas to enhance and refactor the server.

You can have a look to the individual commits e.g. with this command or view the commit log here:

The two distinct module interfaces from SER and Kamailio were unified to one, new interface. This change needed the majority of work, as all (over 200) modules needed to be migrated as well. The upcoming Kamailio version 5.2 will therefore have a new module interface, our core code is now easier to maintain as we don't need to take core of two different interfaces.

You can find more technical details also in this post from kamailio.org.

The Kamailio database layer were extended to support now also unsigned integer values, needed from some modules (like dialog) especially with MySQL databases. This will fix some bugs related to storing dialog data in the database.

We also spend a lot of time to triage existing bugs in our tracker, to enhance the debian package building infrastruture and to fix different bugs in modules and core parts of the server.

Overall it was a great and productive developer meeting, and I hope that we can repeat this in the next year.

Blogs that I read